This Frog Glossary contains most of the terms you need to understand these amazing creatures.

Advertisement call - The mating call of male frogs and toads. 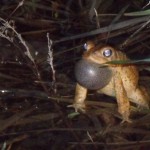 Aggressive call - The call a male will give when another male gets too close.  Also called a “Territorial Call.”

Interesting Fact: “Can you hear me now?”  Frogs and toads have several

Amphibian - Vertebrate animals that spend part of their lives in water.  It means “double life.”

Amplexus - The position of the male frog on top of the female frog to fertilize her eggs externally.

Anura - The order of frogs and toads.  It means “tail-less.”

Archaeobatrachia - The families of frogs and toads known as “Ancient Frogs.”

Army - A group of frogs.

Binomial Nomenclature - The biological name given to every living thing.

Boss - A raised boney area on a toad’s head between the eyes.

Calling Intensity - A number from 0 to 3 to indicate the intensity of the species heard.

0 - No frogs or toads heard calling

1 - Individuals could be counted; there was space between calls

2 - Calls of individuals could be distinguished; some overlapping of calls

Chorus - A large congregation of singing, calling frogs and/or toads.

Chytridiomycosis (BD) - Also known as Chytrid (“kit-rid”) or just BD.  This is a fungus of frogs that effects the permeability of the skin and is deadly to most frogs.  However, some can be healthy but carry the fungus to other susceptible frogs.

CITES - The Convention on International Trade in Endangered Species of wild fauna and flora.  It is illegal to trade in listed species.

Citizen Scientists - Those citizens of all ages and backgrounds who contribute scientific information to the wide variety of research and monitoring projects worldwide.

Detritus - The decaying plant and animal matter that collects at the bottom of the pond.

Distress call - The call a frog or toad makes to discourage a predator. 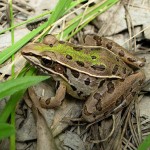 Dorsolateral - Parallel folds or stripes along the back.  The white stripes on the back of this Southern Leopard Frog are actually folds of skin.

Ecosystem - The system of interactions between living organisms and their environment.

Ectothermic - The method of controlling body temperature by using the available surroundings rather than internal processes.

Habitat - The place where an animal or plant species naturally lives and grows; or characteristics of the soil, water, and biologic community (other plants and animals) that make this possible.

Herpetology - The study of Reptiles and Amphibians.  Why are these two distinct animal classifications lumped together?  Who knows?  It’s like having a single scientific area defined to study Birds and Fish!

Invasive Species - A species of plant or animal that is not native to an area, and due to its numbers, is causing ecological harm.

Interesting fact: A bullfrog can be considered an invasive species.  When introduced to a new wetland it can devastate local frog populations with its voracious appetite.

Knot - A group of toads.

Mesobatrachia - The families of frogs and toads known as “Middle Frogs.”  Only Spadefoots in Arkansas belong to this group.

Monitoring Protocol - A set of detailed instructions by which a monitoring session must always be performed.

Parotoid glands - Toxin glands found on toads behind the eyes.  Wash your hands after handling a toad and avoid touching your eyes, nose, or mouth. Note the prominent parotoid gland behind the eye of this Dwarf American Toad.

Phenology - The study of the seasonal timing of events.  When do the frogs start and stop calling?

Polyploid - Having one or more extra sets of chromosomes.

Pollywog - Another name for tadpole.

Interesting fact: A person is considered a “pollywog” by sailors until they have traveled south of the equator, at which time (after a suitable initiation by King Neptune) they become “shellbacks.”

Ranavirus - A disease of amphibians.  In frogs and toads it causes the tadpoles to die.

Spawn - The frog and toad eggs.

Tadpole - The larval stage of the frog and toad life cycle.  It has a tail for swimming, a jaw adapted to eating vegetation, and gills for absorbing oxygen from the water.

Taxonomy - The process of classifying all living things by their similarities and differences.  From top to bottom remember “King Phillip, Come Out For Goodness Sakes” which actually refers to the Wampanoag Indian named King Phillip who was being chased by the colonists during King Phillips War (1675-1678).  Use the first letters to identify Kingdom, Phylum, Class, Order, Family, Genus, and Species.

Toe Pads - Fleshy, disk-shaped, sticky areas on the toes of most treefrogs. 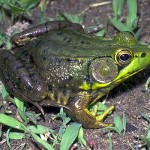 Tubercle - Rough area like the warty areas on toads and the inner part of the spadefoot’s digging toe.

Tympanum - A frog or toad eardrum.  This Green Frog has a very large tympanum behind his eye.  In some frogs, male’s tympanums are larger than the eye (as shown).  Other frogs have minimum tympanums.

Wetland - Simply the wet area between uplands and deep water.  Wetlands need three components - 1) The presence of plants that are known to grow in saturated conditions, 2) Soils that lack oxygen, and 3) Water at or near the surface for at least part of the growing season.