Peg and I spent a couple of enjoyable days in Rayne, LA for the 41st annual Frog Festival on November 8th and 9th. There were frog murals on many buildings and 109 frog statues like the one above - each one unique. Click on the picture to see a lot more pictures on the Arkansas Frogs and Toads Facebook page. Peg and I traveled to Leland, Mississippi on October 26th for the second annual Frog Fest. 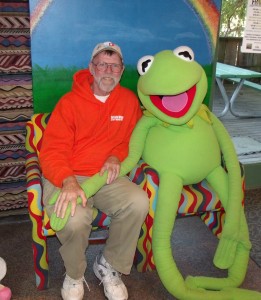 We started out at the Jim Henson Birthplace Museum and Kermit the Frog happened to be there for photos!

Down the street a short way was the second annual Frog Fest held next to Deer Creek in Leland, Mississippi.

There was a chili cook off, blues music, and a Halloween costume contest, although no one dressed up as any of the muppets.  All attending were having a grand time, but there were not any frogs in attendance (in the many vendor booths or otherwise) except for one table set up by the museum which sold many great Kermit items.

On November 8th and 9th, we’ll be attending the Frog Festival in Rayne, Louisiana, the Frog Capital of the World.  Learn about it here.  We’ll post that one in a couple of weeks. 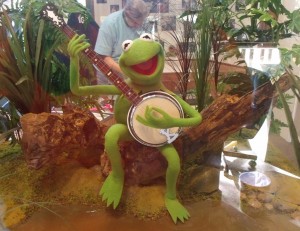